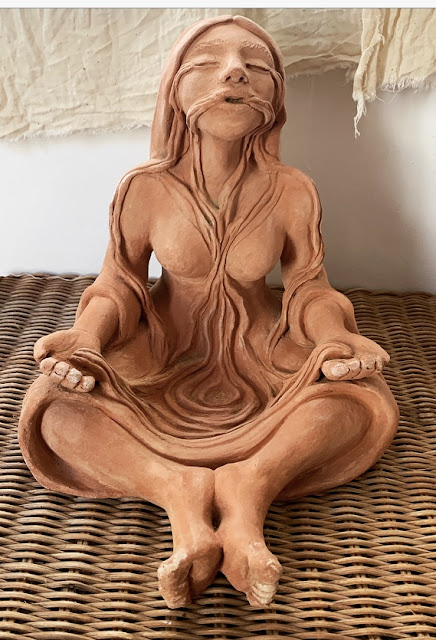 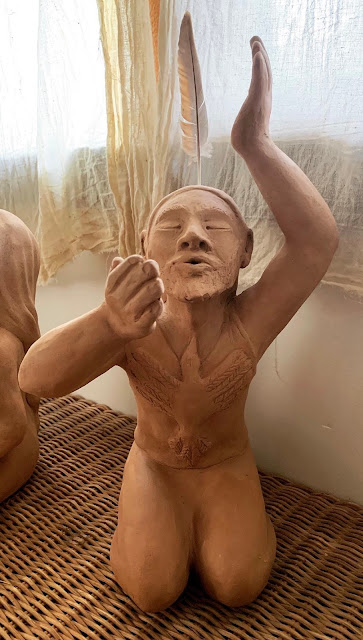 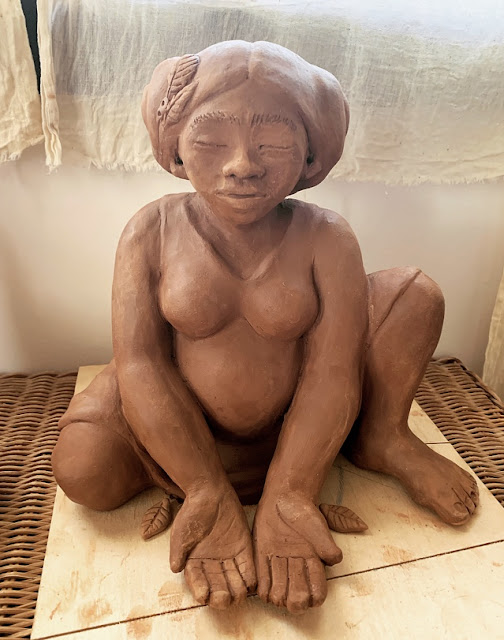 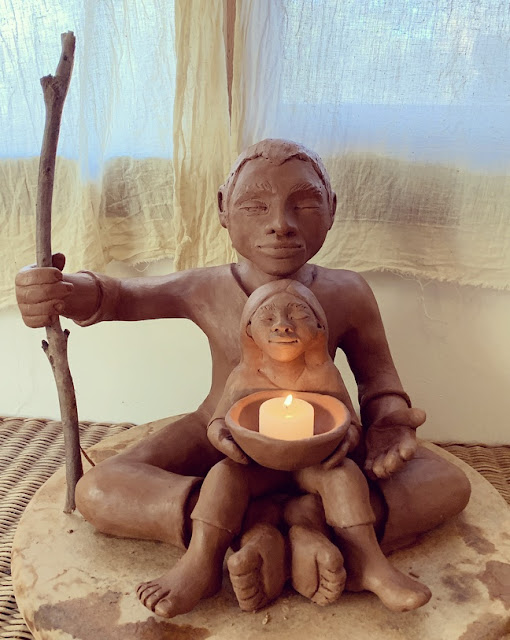 These pieces were created as part of the 2009 Bushfire Commemoration Contemplation Space that Vicky Basdeo and I collaborated on and launched at the Ngulu festival at ECOSS in May 2019. Whilst the experience of collaborating with Vicky was a delight, my own emotional experience of the work, as someone deeply impacted by these fires, and my creative experience as an artisan, were deeply fraught and conflicting. Three of these 4 sculptures exploded in the kiln and now lie buried in their 3 directions around the perimeter of ECOSS, whilst Water Woman alone, holds a physical presence alongside Vicky's beautiful contributions, the one remaining palpable offering of formal completion in a good deal of unrealised creative effort. The burying of the pieces into the earth felt like a cathartic offering in itself as a deepening of my experience of loss and grief having lost my dear father in these catastrophic bushfires.Below are some musings on what this project on the whole meant to me and what I came to understand as the project reached its completion.

Outside of the lovely collaborative synergy of the meetings that Vicky and I have shared over the past few months and the powerful medicine of her gentle company, this project has for me been a journey that has constellated around the need for presence and the search for boundaries, of spaces that emerge between our desire for control and our need to surrender, of immersion in the alchemical creative process and the search for discipline.

It has seemed on many occasions that I had bitten off more than I could chew with this project. There have been moments where I have been dancing on the fringes of defeat and of shame, about how it has unfolded for me, I have rung Chelsea on numerous occasions with the impulse to withdraw from the project. But then within that I can feel the fertile edges of the possibility of just being very deeply authentic with it and owning the raw and messy space of it inside me.

In regard to the blown apart sculpture of the Air element, a friend has reminded me of the story of Osiris and his dismemberment and the quest to reassemble his parts. This is a myth that I have been exploring in my study of soul-centred psychotherapy over the last year. I feel very alive to the parts of ourselves that can become psychically cut off as we make our way through life, and the very pressing task, for me at least at this time, of retrieval and attending to these lost and severed aspects of self, in an attitude of gently re-parenting them back into cohesion and relationship again, with the wholeness of who we are as individuals and as a collective. There feels to be some thread of meaning there for me, in my own art making process of creation and loss and the thwarting of intent that has played out in the creative matrix of this instillation.

The bush fires are very much alive for me still obviously, in the field of grief and trauma, personal and familial, and my relationship to the masculine through the loss of my father, and being pregnant with my son at that time. To have envisioned harmony between the elements and sought to represent them in a state of equilibrium and harmonious resonance, has not been as straight forward as I might have initially imagined possible. Clearly there is still inner journeying required to know this harmonious relationship of elemental energies, within myself as a being and a creator.

And then there is a noticing of the part of me that is so disappointed that I have not “succeeded” or “accomplished” in the way that I would have hoped, in the way that I set myself up for. But maybe to commemorate the bushfires for me as an artist and as a grieving human, is not about success and accomplishment. Maybe it is about brokenness and the aliveness of grief and trauma that is resonant in my life still. Maybe it is about the reality of the lived experience not always being controllable, about the things that are taken out of our hands, the precious things that life can take away without our consent, and the raw and irreconcilable space that can be left behind in its wake.

Maybe this experience has for me been an illustration of transience and grappling, of the duality of creation and destruction, of accomplishment and failure to be as accomplished as one might expect of oneself, and of the great primordial dance of the elements, their conflict and imbalance, their destructive potential, their beauty and balm, their essential life-giving nourishment, their relational alchemy and harmonious reciprocity.

What is most resonant with me in this developmentally liminal threshold in the creation of this contemplation space, here but not fully complete, alive and still distilling itself into being, is the ask for gentleness and compassionate listening, to self and other and to that which is co-arising in the space between us all. It was this that I had wanted to create for us as a community in this commemorative piece, as we reflect upon the 10 year anniversary of the Black Saturday Bushfires, as people who live in a bush environment and therefore require a degree of awareness of how we live with the elements and their potentials for creation and destruction and as an area that has become the new home of many who were impacted by those fires. Rather than constructing a monument, Vicky and I talked about a space for grief, the alchemical mysteries of grief and praise, permission to feel and embrace the uncertain and orphaned parts that we don’t always give ourselves permission to behold.

However it appears that I as an artist am not immune, or held outside of this need for that same compassionate listening, the same non-judgemental space holding, for the process of life to just be what it is, with the invitation for it to be fully felt, and the attunement to the inevitable vulnerability that can arise when we allow ourselves to embody the fully felt experience of life as it happens to us.

This instillation space is not complete for me yet, there are sculptures still to be fired and one at least to be remade. I will be perservering in the days to come, to see where we may land by the Spring Fair, out the other side of our wintering. Similarly the process of healing from grief and trauma is never really complete, we are just constantly reforged in the fires of how it lives in us, how we can come to carry it in ways that are life-giving rather than untenable, how we let our experience grow us rather than diminish us, how we can sensitively and courageously work with the raw materials of our experience, the elemental building blocks of our creation, to craft something enduring and supportive to ourselves and to one another.

Sometimes the gift lies not in the perfection, but rather in the humbling. Not in the completion, but in the long and winding road. Sometimes what is being asked is to be deeply in the field of the process of our lived experience, rather than on the linear road of neatly packaged outcomes.

A Gift For Grief 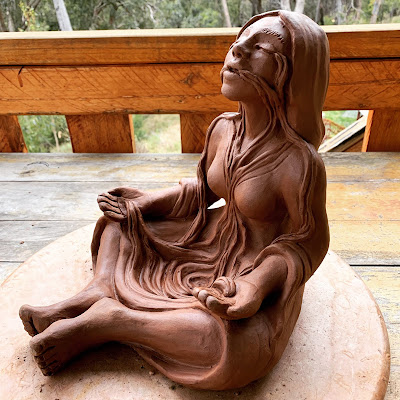 A Gift For Grief

Some of us have been born here
with a gift for grief.
We have wandered around the earth
unhinged from the joy that surrounded us,
bewildered as to why it was
that our hearts broke when others did not?
Why the wound could never quite heal over?
Why the well of tears would not run dry?
Maybe after an eternity of not knowing
what to do with all our grief,
we have been born at this time on purpose?
So that all that we are losing,
day by day,
the untold magnitude
of all the delicate treasures lost,
will be grieved for,
beautifully and with generosity.
So that the life-giving tears can be received
into the hard dry earth at our end,
and the last of species may hear
the heartbroken ululation of our grief
at their passing.
We might become the tender watch song,
the brave sentinels,
our hearts ablaze
with the depth of our care
and our capacity to let the loss be felt,
and our courage to lay a desperate claim
upon what it is that we have done here,
and to be brave enough to love what is lost
through the sinews of our ravaged hearts.
So that the water and the air
and the fire and the earth
and all the vast council of beings,
will reverberate with the sibilance
of our ancient keening,
not so that we might all be saved
from ourselves after all,
but so that we will die well,
in the knowledge that the Earth’s profound beauty
was seen and known,
loved and cherished.
Maybe in the end,
dying well,
in the presence of love,
in the knowledge that we will be missed,
is all that’s left for us to ask for.
I do not offer this from a place of meanness
or defeat,
but as an opening to purpose and to dignity,
a leaning into the possibility of beauty after all,
however terrible it may also be.
Perhaps there is still time
for a magnificent restitution,
a gracious salvation?
But if not,
when the time comes I hope I will be ready
to grieve as magnificently
as my life has prepared me for.

Posted by Lucy Pierce at 9:47 PM No comments:

Email ThisBlogThis!Share to TwitterShare to FacebookShare to Pinterest
Newer Posts Older Posts Home
Subscribe to: Posts (Atom)
"Beloved Kin, dear ones with eyes that would see and hearts wide enough to forgive the short-comings, I ask that you bear witness to this trepidatious birthing of a part of myself into the world. I offer this because I feel it asked of me in the wee hours of my dark nights, because it is what I am most afraid of and because it is what I want most for myself; to give of that which moves within. The place in which I find myself at the commencement of this endeavour , and what I feel moved to share from that place, feels deeply raw and vulnerable, but beneath the fear of revealing my underbelly is a gentle beckoning to share with the world that which I truly feel myself to be, both that which shines boldly and sings of truth and radiant becoming, and that which dwells yet in the shadow places within, a whisper to unveil the unformed and the as yet unlived, the deep and the dark of me. It is my prayer that something of the truth of this might touch something in the truth of you, so that I might know myself more deeply and so that a shared becoming may come to flower in the space between us, in the space between the within and the beyond. I give my heartfull thanks for your reflection and beholding"
Lucy Pierce
Soulskin Musings 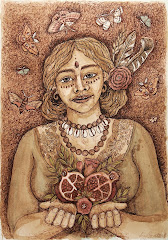 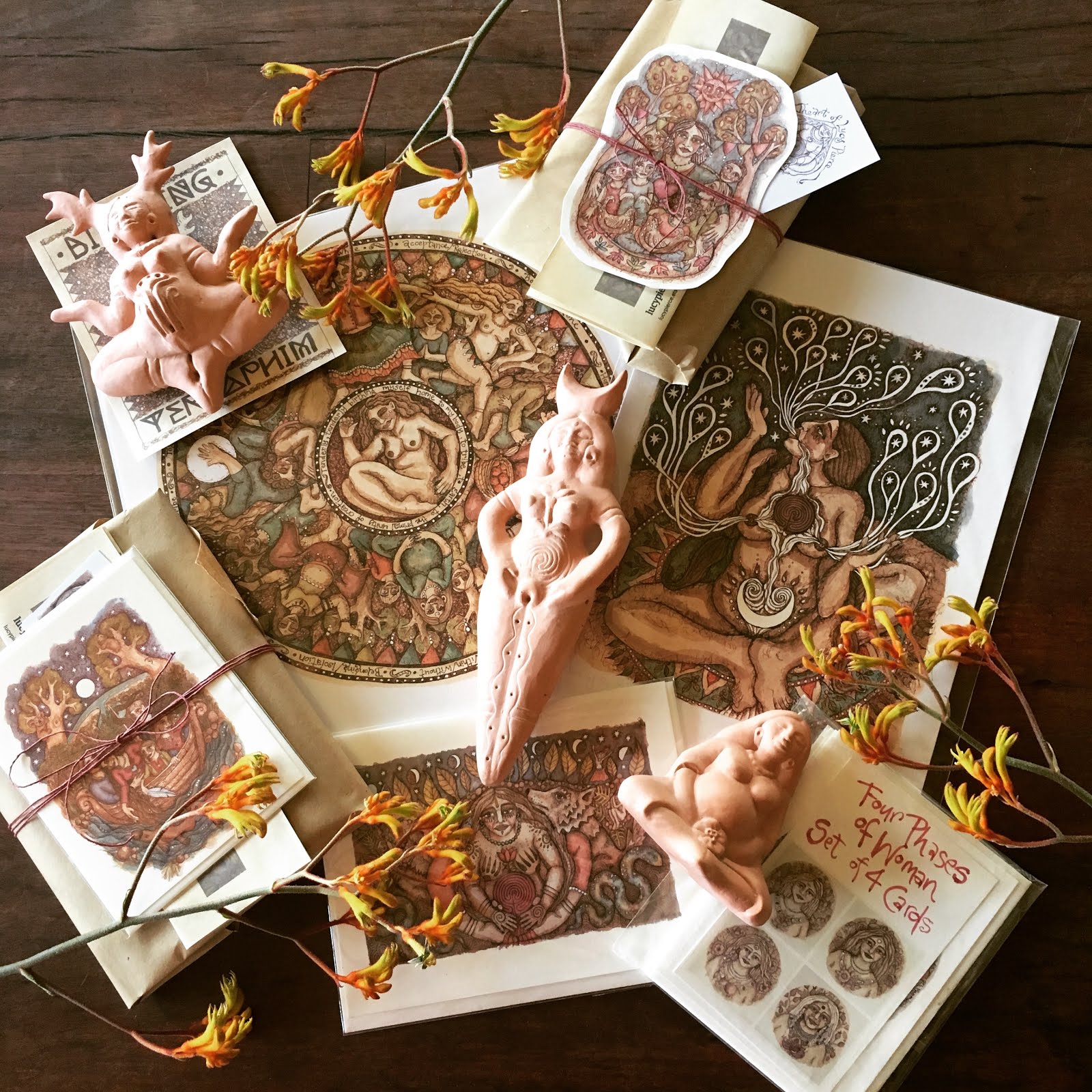 The Art of Lucy Pierce